GRAS representatives have attended the PDAC2020, March 1-4th 2020, the world’s largest and most diverse mining convention, totalled with attendance of 23,144 visitors, highlighting the resilience and innovation of the international mineral exploration and mining sector.

The Serbian delegation visiting PDAC was widely represented by President of the board of directors of GRAS, Mr Branko Zečević and other board members of GRAS, the Ministerial Delegation of the Ministry of Mining and Energy led by Minister Aleksandar Antic, State Secretary Stevica Dedjanski and Assistant Minister Ivan Jankovic, as well as the representatives of the Embassy of Canada to Serbia and most of the junior mining companies from Serbia.

The Fourth Annual Session of the Western Tethyan Belt, the all-day event, organized by GRAS member MUNDORO , was the most important event for Serbian mining industry with more than 200 attendees from the worldwide mining industry. Minister Antic presented the mining sector of Serbia, pointing out that Serbia has become a country suitable for investment and ranked 4th in European countries in terms of attractiveness for investment in the mining sector, according to research by the Canadian Fraser Institute. 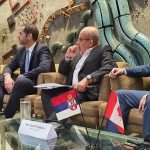